Let me start by explaining the shortcuts in the headline:

And that basically tells you what it’s all about: I took a closer look at the bikes of the participants in the above-mentioned bikepacking races and evaluated them in terms of components and equipment.

In addition to my own research on Instagram, I also relied on the good “Rigs of…” articles by the colleagues at Bikepacking.com.

Apart from a certain nerdiness, I was particularly interested in the gears and gear ratios, the tyres and bags used by the riders in these probably most demanding bikepacking races.

Of course, this is completely irrelevant for a normal bikepacking adventure, but it gives those who are interested a good insight into what is considered suitable and good by the “bikepacking extremists” and what can also be relevant for use on one’s own tour.

I have called this evaluation “Bikeanalytics” and have so far only published it on Facebook. And over the years, I have also expanded it in terms of the data collected.

Since there is a lot of interest, I have compiled the analyses for you in this article. This way you can find and study them better.

This evaluation was based on 45 bikes that I found on Instagram under the hashtag #silkroadmountainrace, as well as in the Bikepacking.com article “Rigs of the Silk Road Mountain Race 2019”.

I found it interesting that carbon as a frame material has now become accepted even in these quite rough and demanding missions and had as many representatives as steel with 33%.

I also found the clear majority for 29 inch wheels just as interesting, but this might be due to the fact that such races were not really feasible with a conventional gravel bike at that time. Nowadays I would question that, because gravel bikes have definitely gained in solidity. We will see this in the evaluation of the SRMR bikes from this year.

Also interesting is the dominance of 1-speed drivetrains as well as the main use of Maxxis tyres back then, especially the Maxxis Ikon.

Last year the AMR took place for the first time. You should keep this in mind, especially with regard to the data below, because the choice of wheels and equipment obviously depends on the experience on and requirements of the course. At the AMR we didn’t yet know what to expect and so there was a motley mix of gravel bikes (not a good choice), endurance dropbar MTBs (was ok) and hardtail MTBs (very good) through to fullies (can be done).

Anyone preparing for the next AMR and studying this data should know that the “general” recommendation for Morocco tends to be hardtail MTB, or bikes with clear MTB genes. If I were to ride the AMR again, it would be with an MTB and straight handlebars.

I evaluated 93 bikes, based on the Bikepacking.com article “Rigs of the Atlas Mountain Race 2020” and Instagram.

Again, the most used frame material was carbon, followed by steel. 29 inch was the most used, but the percentage of 650B wheels was significantly higher compared to the SRMR. However, this was because many participants thought it was actually a gravel race, which it was not. At least not for everyone.

1-speed drivetrains were also in the majority here and only a few riders were using suspension. This percentage will certainly increase significantly in the next edition of the AMR.

The majority rode with hub dynamo, which makes sense considering the many night hours around this time of year. 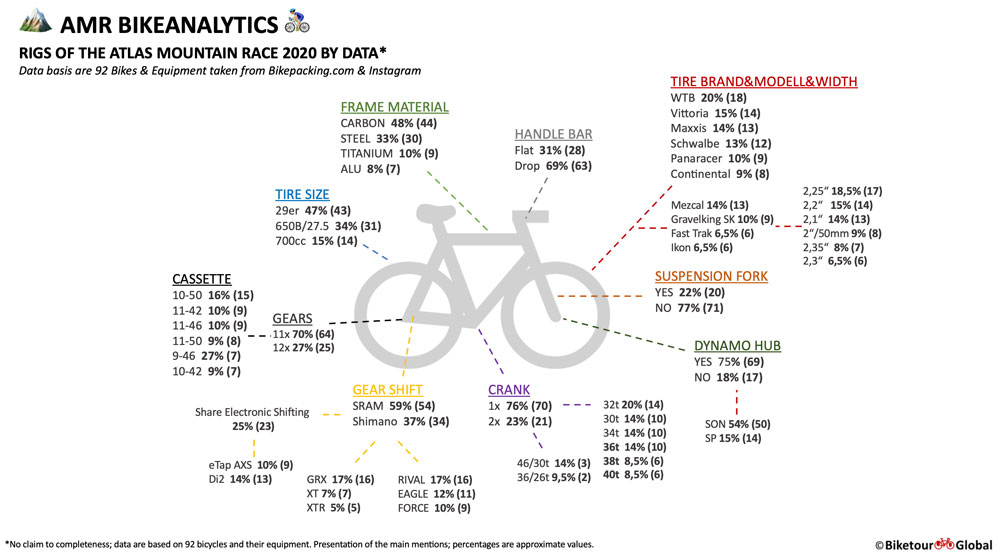 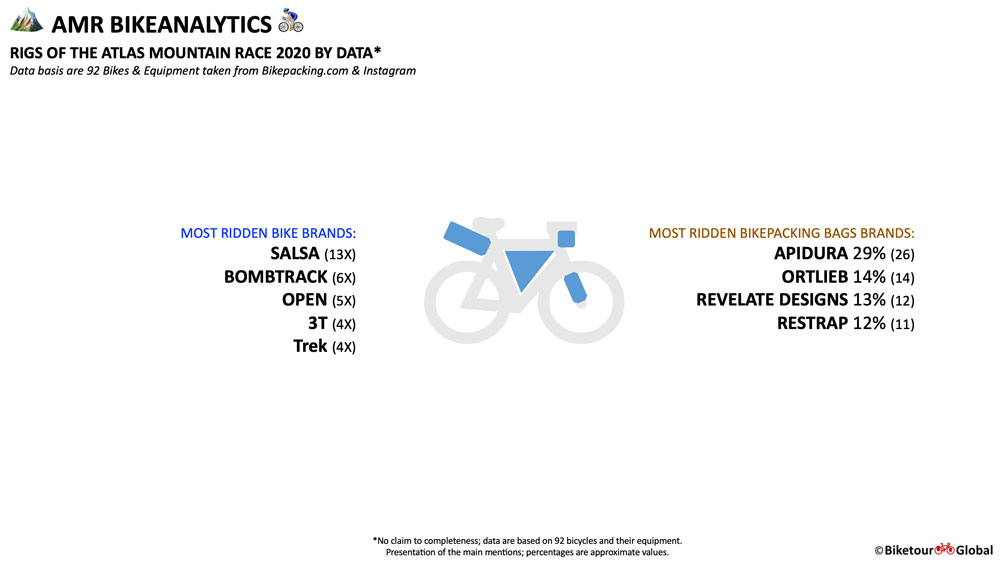 What kind of bike do you need to cycle many thousands of kilometres across North America, on remote gravel roads, over high mountain ranges and with a wide temperature range? The Tour Divide is the “mother of all bikepacking races” and is now over 4,000km long.

Again, I took a closer look at the Bikepacking.com article “Rigs of the 2021 Tour Divide” and evaluated it accordingly. This time, however, I also noted how many participants are riding with an aerobar.

In the data below, however, it should be noted that the Tour Divide is an all-American race this year due to the pandemic, which is also clearly reflected in the material used.

So the majority are riding Salsa wheels and using Revelate Designs packs.

In terms of frame material, carbon has prevailed and titanium has even overtaken steel. 29 inches is by far the wheel size of choice, which makes perfect sense given the route and challenges.

1-speed drivetrains dominate, preferably from SRAM, and when it comes to tyres, the Vittoria Mezcal has once again taken the “lead”.

Regarding aerobars: 2/3 ride with a handlebar attachment and thus get some relaxation and speed on the long haul. 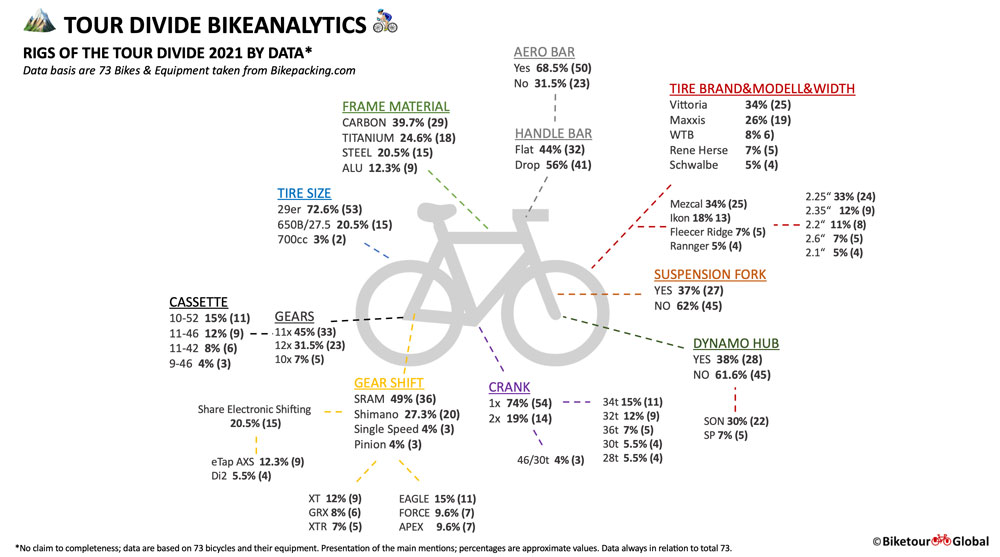 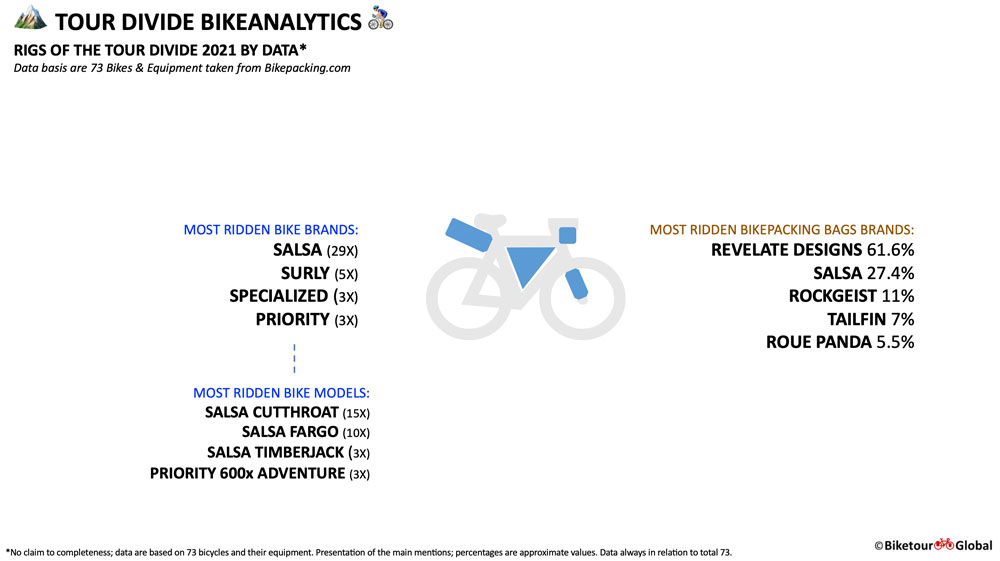 I also shared my data on Bikepacking.com and found an interesting analysis of the age distribution of the riders, which I am allowed to share with you – thanks to Don Neifert!

The majority is 50 years old – so I still have a few years until the Tour Divide! 🙂 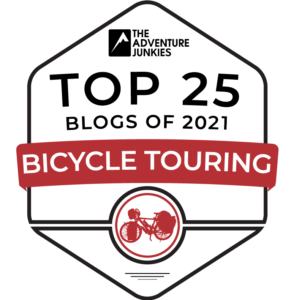