The VentureMax XL handlebar was offered to me by Ritchey for testing and then left for use. Therefore, this is advertising. I have asked my fellow Salsaletten team mate Tobias to try out the handlebars and undergo a practical test. And also to write about it. The following test report is therefore from Tobias - thank you!

My first impression: something is not right here. The handlebar is in a foil but this wave is immediately noticeable. A buckle at the lower dropout. Not massive, but clearly visible. My first thought: transport damage. But the box is intact, no dents or the like. And Martin said yes, this handlebar is different. Wider flared, flat tube on the upper link and with flare on the lower link.  But he didn’t say anything about the buckle. Finally there’ s the all-clear – the buckle is on both sides, so it must be like that, I think, grin and ask: Does that disqualify me for a test if I don’t recognize something like that straight away? 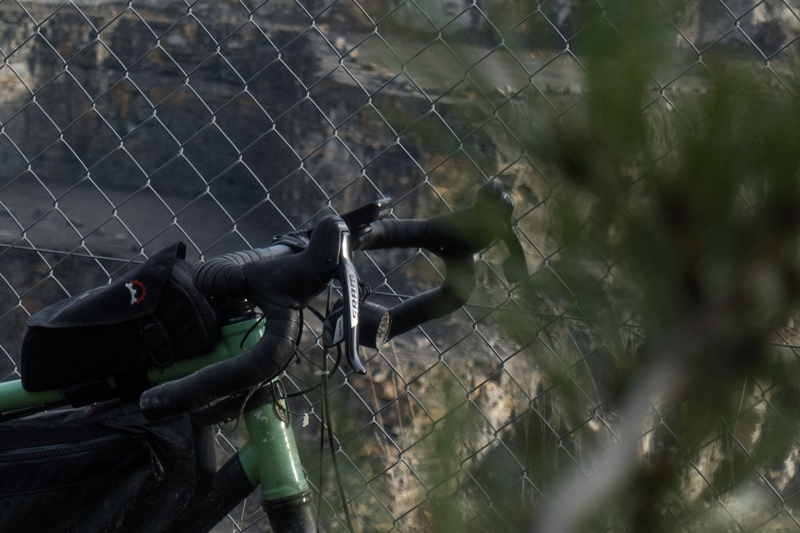 Let’s start from the beginning: Martin and I are race buddies. We rode the Atlas Mountain Race as a team, are both on Salsa Fargos, hardly see each other, sometimes hear each other, write each other daily. Mostly several times. In fact, we’re friends. And that’s why Martin has to listen to my whining. I then whine to him that the bicycle industry ignores guys like me. Two meters, a hundred kilos, bang out of any product developer’s focus.

So I was happy when Salsa announced a wider version of the Cowchipper handlebars last spring. An adventure handlebar, previously only up to 46 cm wide, now then up to 52 cm. I ordered the handlebar in the summer and have been waiting ever since. And when I wanted to start on the phone with Martin just to the handlebar rant, about the non-deliverable Salsa, the expensive Walmer bar and certainly I would have thought of more, as Martin said: ” Do you want to test the Ritchey VentureMax XL, I would have just here?”

Yes of course I want. So the handlebar comes to me and with it the question: How could such a test run – I’ve never done anything like this before and already seem to be briefly confused by a deliberate bend in the handlebar. So I formulated two premises for myself: First, the test is subjective, which means: here are my personal impressions. And secondly, I need target questions that help me answer the question “Is the handlebars something for me?”. So I came up with the following questions:

Reading through the description of the VentureMax on the Ritchey site, the very first sentence pretty much sums it up: “Tom Ritchey has been riding off-road and riding far.” And you can tell that from the stuff he designs and builds. Martin recently wrote here about the Outback, an adventure bike that shows that experience. No one else would probably think to build a handlebar like the Ritchey VentureMax XL. 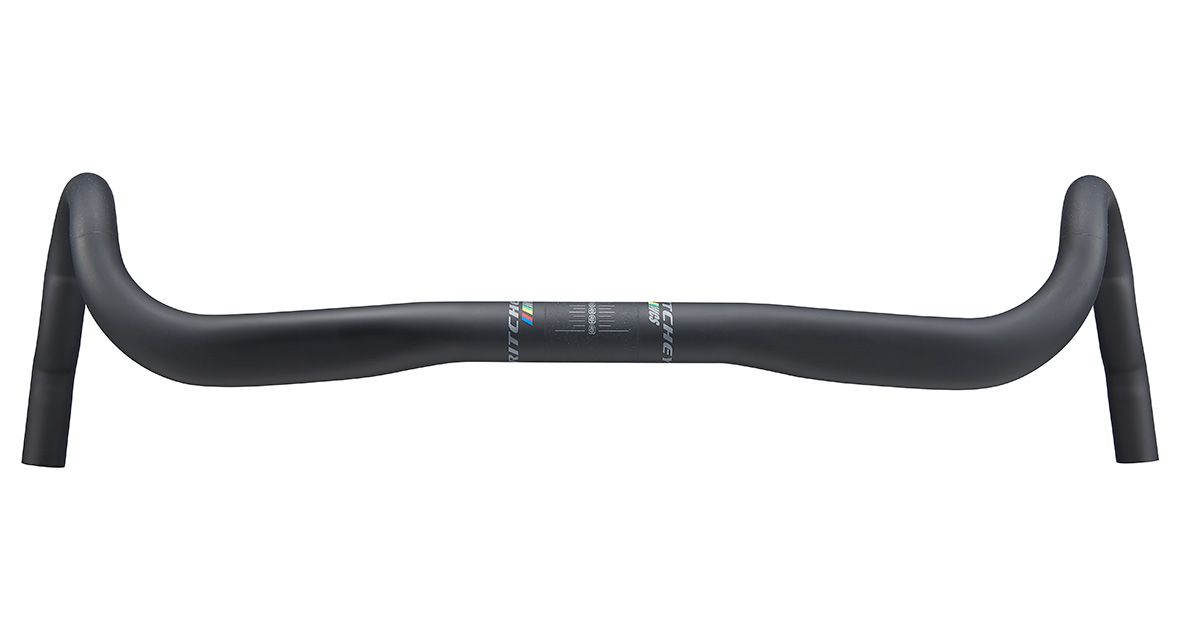 The handlebar measures 52 cm at the drops. At the upper link, the tube used is not round but flat and the ends in the lower link are turned outward by 24 degrees (drop flare). Another refinement: Ritchey’s “Ergo Bio Bend” – that little bump in the lower link position that could be mistaken for shipping damage – but more on that later. The VentureMax XL is made of aluminum, weighs 325 grams and I was amazed: The handlebar looks really heavier than it is. 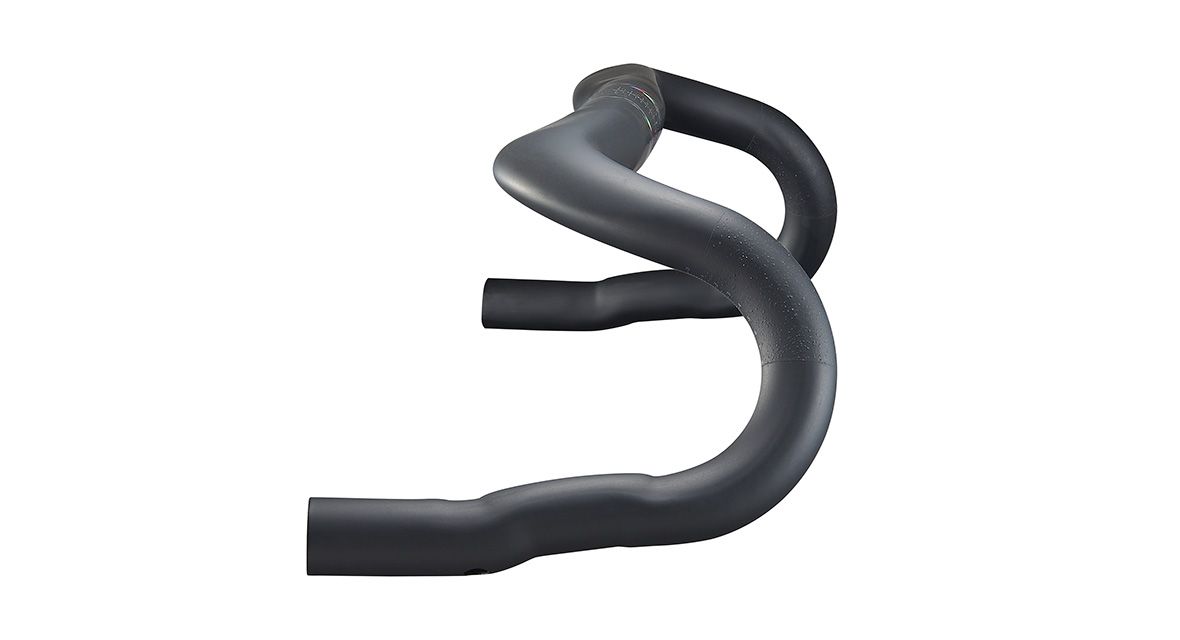 I built the handlebars on my green Salsa Fargo 2019 model. Since I cracked the frame below the seat clamp on my Fargo 2020 in the summer and I’m waiting for the exchange frame, the green Salsa is my “staging bike”. I test on the green Salsa, which should come later on the black Race Salsa. There is a Sram-Rival with Garbaruk cage switches a 11-50 Sunrace cassette behind. At the front still hangs an Apex shifter / brake combo, although the bike has long been converted to 1×11 drive. Best test environment so for the Ritchey handlebar. 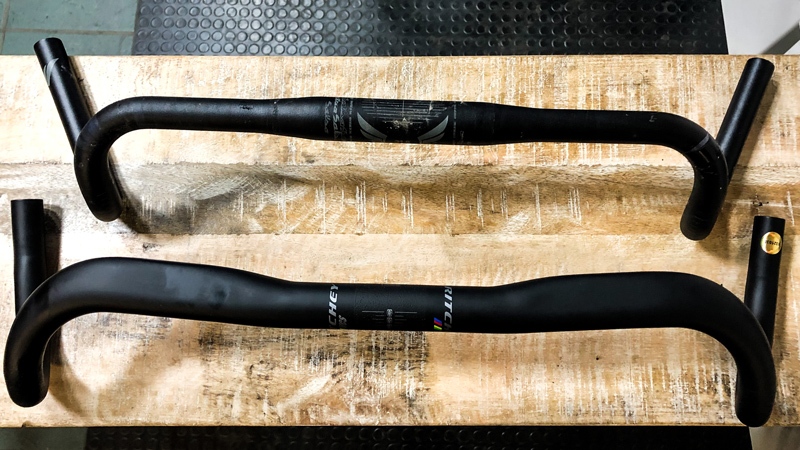 So far I’ve ridden there the Salsa Woodchipper in 46 cm width, this extremely flared Adventure Bar, the handlebar tape double wrapped, which was really comfortable on long distances. At the Ritchey I have the handlebar tape simply wrapped, only at the lower link and at the drops to the shift / brake lever I have a strip of old handlebar tape stuck under. What I liked: On the underside of the flat upper link there is a recess in which the brake and shift cables disappear, you can no longer feel them. 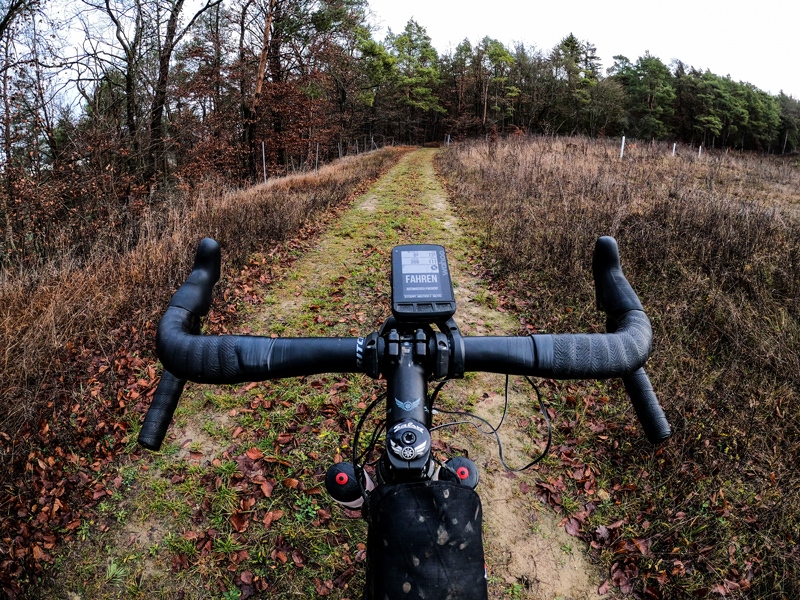 A possible point of criticism, by the way, I can invalidate here immediately. The “Does not get stuck with such a wide handlebars everywhere” question. Clear No. The VentureMax XL is overall narrower than the Woodchipper, because the DropFlare, in the Ritchey 24 degrees, in the Salsa 38 degrees, is far from being as pronounced. To show that, I put the two handlebars times naked next to each other.

I have tested the Ritchey VentureMax XL around Würzburg. Here I live, here is everything available that you need for a test – at least I imagine that: steep vineyard ramps, narrow downhill trails, dirt roads with mud, forest roads with roots, wet leaves, technically simple surfaces for the aerobars, city traffic. I rode the Ritchey once with and once without Aerobars, both times the weather was crap, so perfect for the test. 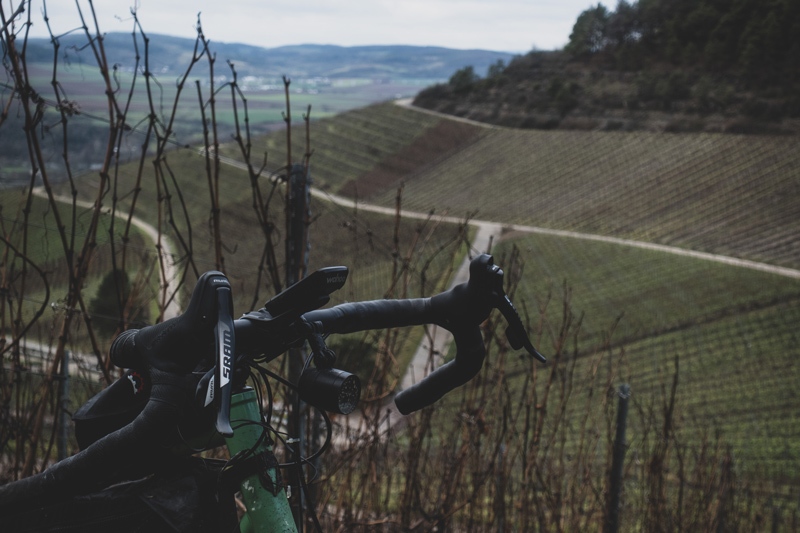 What I noticed immediately on the first meters: The six centimeters more in width, when I ride loosely supported on the shift / brake grips, I notice immediately. My arm position is more relaxed, and the grip width at the bottom of the handlebars is more in line with the distance between my shoulder joints at the top. That feels good. Downhill I immediately have more control, the three centimeters more per side compared to the Salsa make the steering more immediate, more direct, more controlled. I tried this on asphalt, gravel and a root path, it all felt very very secure downhill. 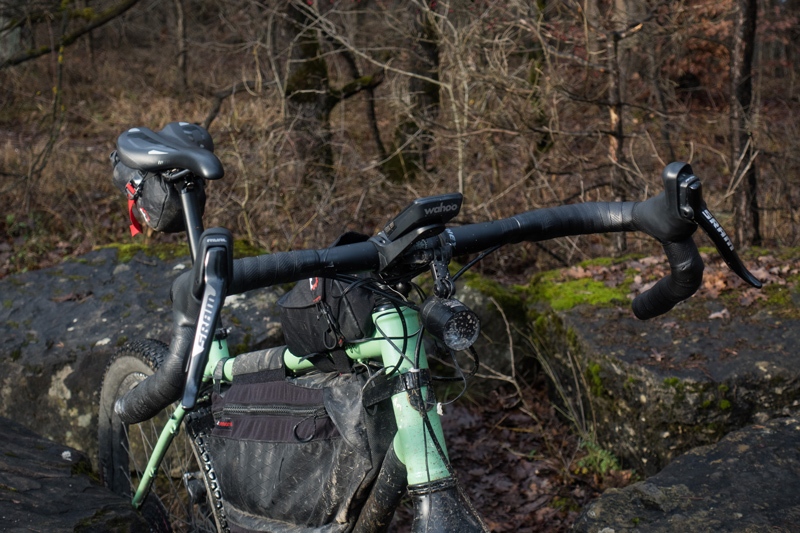 One other thing I think is important: comfort uphill. I like to grip loosely in the top handlebar. The flat top handlebar position makes that easy. You can rest the heel of your hand, you don’t have to grip around, that gives you variety, this position is relaxing and there is also enough space – even with the AeroBar set up. 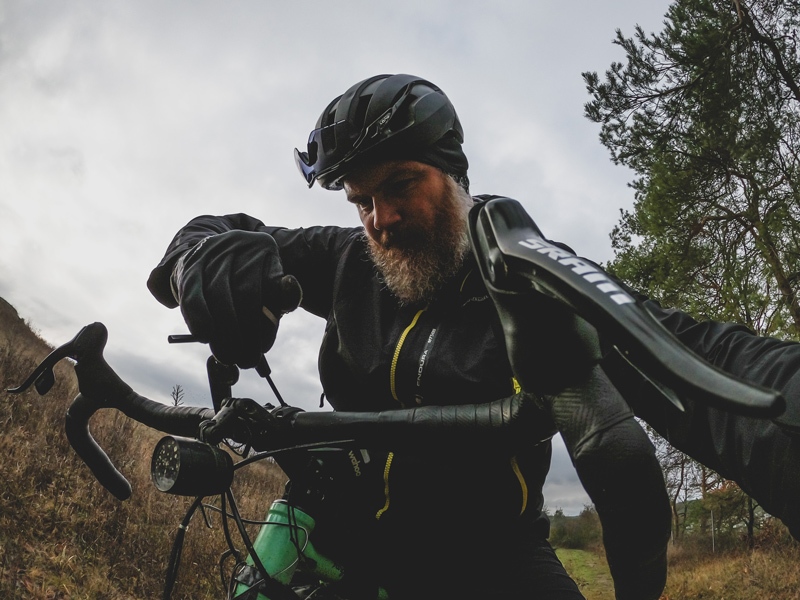 With the Salsa, I always had to reach a bit awkwardly under the aerobar, the forearm support of the bars was annoying because you bumped it with your forearm. In combination with dust and sweat, it was like sandpaper. But that too: solved. Trailer and arm can get out of the way. There is enough space on the Ritchey VentureMax XL: The 31.8 mm clamping area extends over 14 cm, which is two more than on the Woodchipper. Enough space for Salsa Anything Cradle, trailer, light. 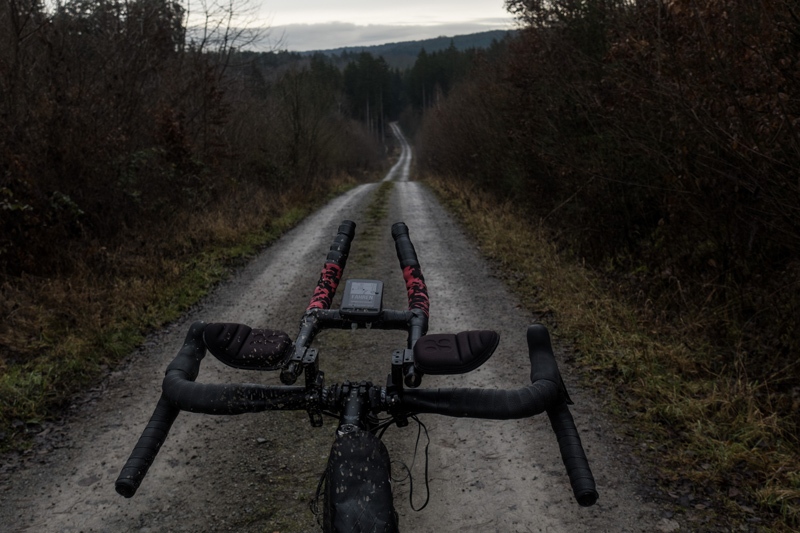 And then there are the knobs, those bumps on either side of the lower link that make the VentureMax XL look so bent. Ritchey says Ergo Bio Bend to it. I ride a lot in the lower link position. Not to give pressure, but because of the variety. Change grip, change position, stretch back, relax neck, allow blood flow – that’s important when the saddle time is 14 hours or more. What’s interesting about the Bio Bends is that they immediately feel normal. If you reach into the lower link, the ball of your hand automatically lands on the elevations. And that’s how it can be endured. For a long time, too.

I can make it very short when it comes to the final conclusion: I am thrilled. The Ritchey VentureMax XL suits me as a Big Guy. I ride more relaxed with the wider handlebars, have more control on downhill rides, appreciate the many additional grip options and the space.

For me, the Ritchey could be the handlebar for the Silk Road Mountain Race. There is only one very small but: I would like to see an XXL version of the handlebar, which may be 56 or 58 cm wide. 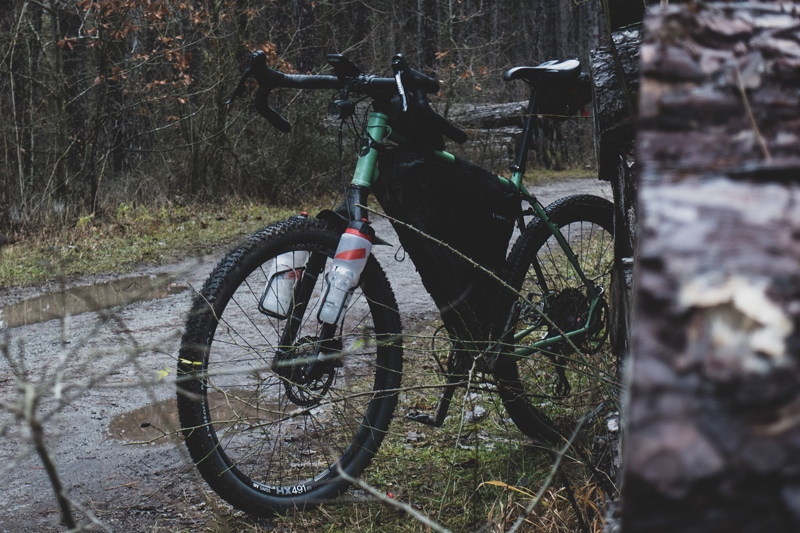 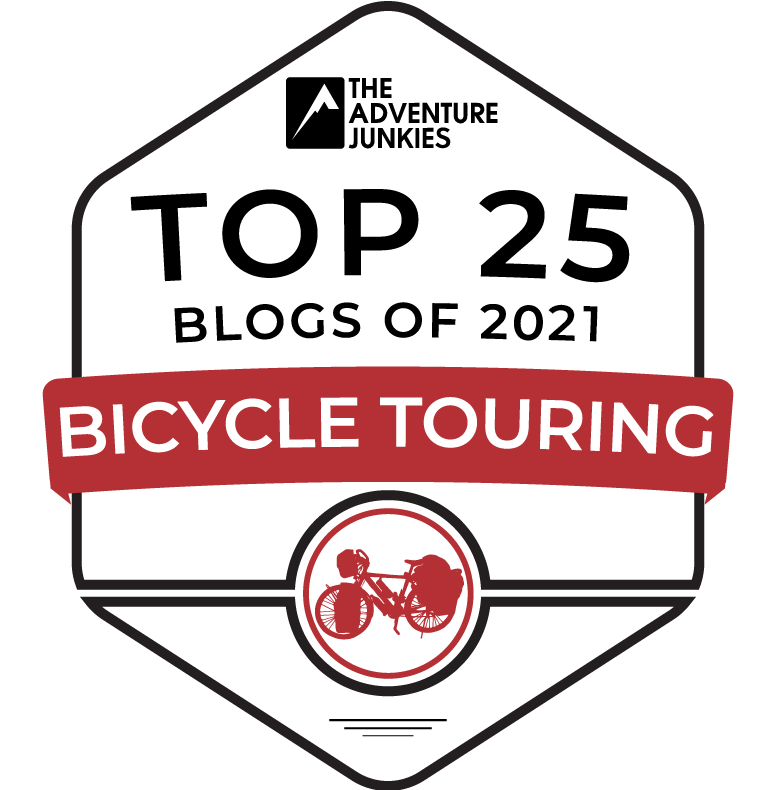